Yesterday was Not. My. Day. It was supposed to be my day off, but for reasons unbeknownst to me, I fell out of bed at 7 am. I mean, what the heck? So I went to lounge about on the couch with a coffee, read some blogs and make the most of it... and the phone rang. A dear colleague (luv ya, Barbara!) had an emergency and could not open the shop, so I duly went and did what a girl has to do. Sit in a badly airconditioned betting shop yawning her head off for 7 hours.

After crawling back home (man, I never felt so tired in my entire life!), I thought I'd just go back to where I left things and went about reading blogs, doing more yawning and pretty much being a waste of space when The Man suddenly stirred and shook his leg... onto which a fat spider had decided to climb.
Let's just say I spent some time on the middle floor, hyperventilating and shaking while the knight in shiny armour unarmoured himself in the quest to find the eight- legged freak. He thought it had made its way into his jeans, so he took them off, took his shirt off, examined the stuff properly and still couldn't find the foe.
Turns out the bugger sat under some furniture, but was eventually found out and politely asked to leave the house (with a gentle nudge towards the neighbour's door!)

With enough oxygen in my bloodstream to last me for a week without breathing, I thought I might as well do something useful (who said washing up? Are you kidding?) and get crafting. And that is where I batcidentally fell in love- have a look.

The man decided that too many owls spoil the broth, so for my second shadow box (I have three of those ugly frame things going on!) I went with another favourite critter of mine: the Common Dozy Bat.
So again, some doodles first: 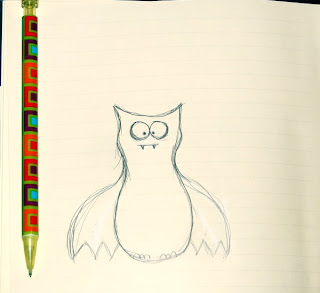 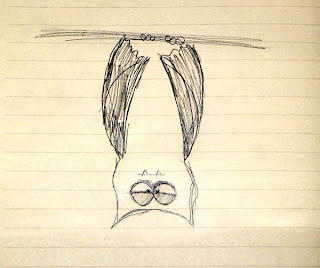 Here they are, the prototypes.

After that, again transferring them to cardboard and some cutting- this time I went for an easier option and only cut the wings and bodies. Even lazier, they only got painted with my new brushes The Man got me the other day (together with a beautiful bag of beads, am I spoilt or what?) and his good old miniature paints. 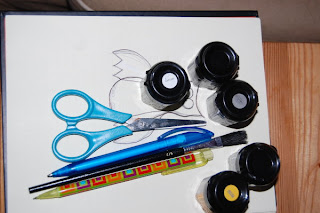 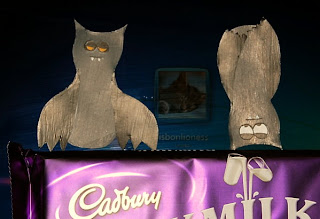 Bob helped me to prepare the frame, which I had spray painted while the bats dried. A piece of firewood ( I had to go into the basement to get it. Not happy.), some more potpourri and a bit of string, here we go: 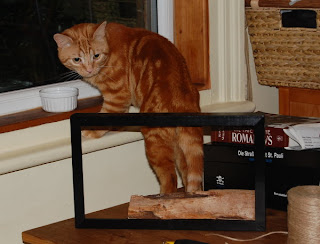 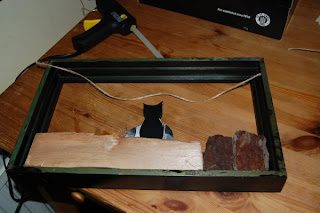 The final result: (sorry about the lame pictures, it was pretty late and I had to use the flash) 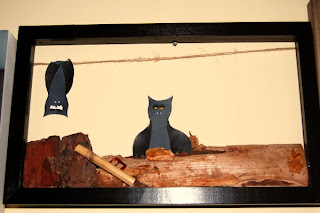 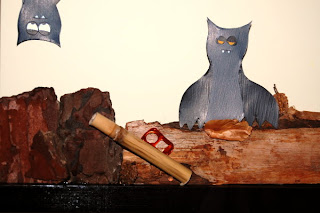 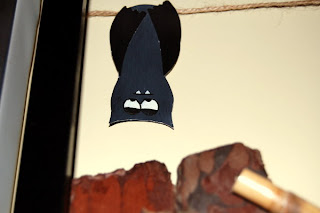 Love them! Honest, the pictures don't do them much justice, if I may say so myself.

Posted by lisbonlioness at 10:23 AM 4 comments: