Times, they are a- changing!

Well, then.
I guess some of you (if there are any yous left to talk to, if not I'll just talk to those little voices nobody else seems to hear. Strange, that.) might have guessed that the changes that happened in this little life of mine have throw me into a bit of a rut.
Bleh.
Depression, more like. Let's keep it real, dudes and dudettes, I was utterly depressed. The full monty, days on end spent in bed without as much as getting up for a sneaky cigarette (kicked that habit recently, just so you know. Good view from this high horse!), increased consumption of auxiliary glasses of wine, decreased performance at work and little or no achievements on the home front, all of which led to a big, dark strain on the relationship with the Mister.
I could not be bothered doing anything that used to make me smile. Camera- dust catcher. Crafty equipment- clutter. Blog- dead pixels. The house I disliked to begin with turned into a despised trap, best to be avoided or ignored. Because we all know that ignoring stuff makes it go away, right?
Well, that might be true for drunk admirers in the pub (they tend to fall over at some point, literally disappearing from view) and spiders (either the cats eat them or the lil' buggers raise a brood of avengers behind the bed, either way you won't see them for a considerable amount of time and when you do you'll have forgotten they were there to start with) but it doesn't work well for ugly houses. Even though the cats made a fair attempt at eating it. Erm.
After going batty for Hallowe'en, I did do jack. Or maybe less, I'm not sure. All I wanted was to get out, get away, get over and done with it, and the poor Mister, well knowing our financial situation would not allow for it, could do little to improve my mood. Gosh, I took it out on him left, right and center. How he put up with it I really don't know- I keep checking if he's hiding a halo and a pair of wings somewhere but I just can't find any incriminating evidence for his angelic origin. Weird.
Let me cut short what could be a very long story.
About two weeks ago I came home from yet another soul- crushing shift at work and the house was dark. I let myself in and found nothing but an empty can of Lager in the living- room. A bad sign, I thought- in my head, he'd run off to the pub to drown all the grief I'd given him in a pint or ten, leaving me to brood over my ... broodiness without even as much as the comfort of a human punching ball. So upstairs I stomped to relieve myself of my work uniform. Just to find... this: 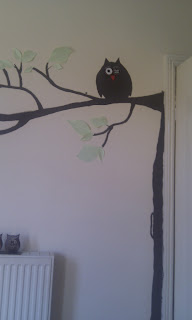 The bedroom wall. Owl. Individually cut leaves. More owls. Fresh sheets. All the clutter- gone. I could show you more crappy mobile pictures, but just take this one and believe me that I walked into an owl- y wonderland. All my owls were there (not that many, but all there!), candles lit, smell of pinecones in the air, I could not believe it was the same room I'd left some 14 hours earlier in a mood bad enough to make the pole caps melt. When he finally emerged from his hiding place (he was actually relaxing in the bath, bless him), the Mister informed me that he was sick of my complaints about not having any trees anywhere near (very urban, our new area), so he brought one into the house.
I nearly wept with joy.
Turns out that according to his estimate, he hadn't seen me that happy and smiley in best part of a year. I reckon he might have a point.
So, that sort of kickstarted me back into reality- the reality we make for ourselves, not the one that makes us. I finally gave up on the whole depression thing, the blame game and one- way trip to crazytown. The Mister dragged me back from that black, black hole and finally made me realize that the only thing that stood in my way of happiness was yours truly. There might have been a little help from a certain Sunny as well, but that's a story for another post, one that will show you (or those little voices in my head) why pansies can live in a bookcase and how a bed base turns into a japanese temple. Oh, and how you can be skint 3 days after pay day and not give a flying fiddlers' fart because everything is going to be just a little bit better than yesterday, but not quite as cool as tomorrow.
Not to forget the fox in the fireplace, rainbow dudes and other oddities that you won't find anywhere but in our... 2 bed terraced.
Ready for a new start? I am. For real this time!
Posted by lisbonlioness at 12:53 AM 6 comments: