Let me show you what happened to my toothache: 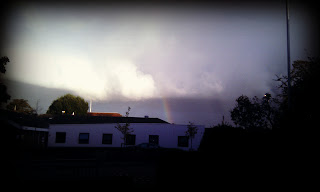 The picture was taken yesterday outside my shop- to the right of the main rainbow, not captured, are TWO faint echoes- it's rare that I get to see something like that around here. Cool moment, one of those where you drop everything and just enjoy the show.

I was given two lots of antibiotics which seem to make me drowsy and sluggish, so the big- ish plans I had for todays project went "the way of all flesh". But I couldn't just leave well enough alone and had to do SOMETHING.
The original plan was an almost life (erm.. undead)- sized ghost from a huge sheet and chicken wire, but I didn't feel up to the task. Probably just as well because it's supposed to instill the fear of Cthulhu into the nippers on Hallowe'en, and it would have been a pain in the neck to hide that thing until then.
So I downscaled a little bit.

Chicken wire, a white shirt Abi has outgrown ages ago and an electronic tealight. 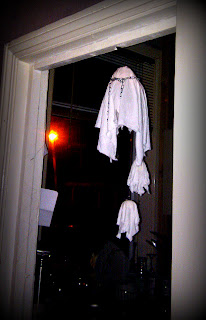 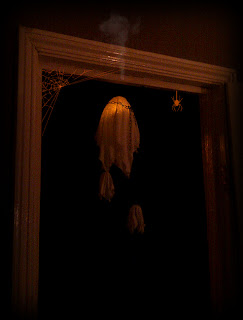 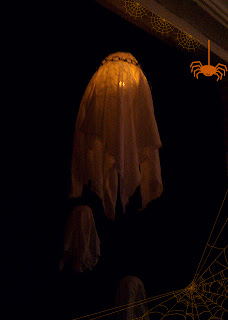 I actually get childlike enjoyment out of the little ensemble, even though it took me no more than 30 minutes (including cutting up the chicken wire, finding the Kinder eggs and stringing it all together) to whip up. Certainly no project I'd proudly link up to high- end parties, but those guys really make my night for some obscure reason! Maybe because they are so simple and archaic- hands up if you ever drove your parents or grandparents crazy by ripping the sheet off your bed to haunt the joint.
So, if you have 30 minutes spare, go cut up some white fabric and see if you get the same kick out of some good old- fashioned ghosties- you might surprise yourself!

Posted by lisbonlioness at 8:39 PM