So... what was planned for yesterday was a fail.
I better make up for it!

My morning was spent spraying, spraying, and spraying some more. And I went through 4 glue sticks as well. Not bad for a job done before breakfast, right?

Let me show you what I was up to.

These two dudes and their identical twins were ruthlessly butchered for the sake of Hallowe'en: 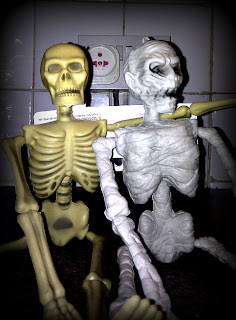 They got re- assembled into this: 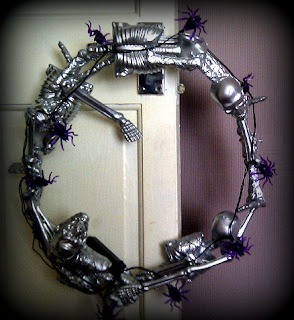 I meant for it to be an outdoor wreath, but then I remembered the purple glitter spray I got for 99p the other day and inspiration viciously assaulted me.

Are you familiar with advent wreathes? Basically, they are wreathes made from evergreens, decorated with 4 candles. In the 4 weeks before Christmas, one candle gets lit every Sunday, and once all candles are used, Santa is on the doorstep!
As a kid, I LOVED those wreathes, and ever since I was old enough I was allowed to light the candles on Sundays. Aaaah... sweet memories.

Now, let me wreck this sweet mental image for you. 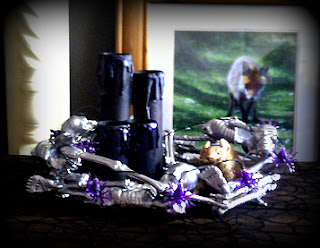 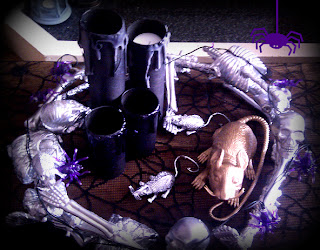 I took some hoarded kitchen towel rolls and toilet paper rolls and let hot glue run down from the top. (spooky wax effect!) All rolls got a nice coat of black spray paint and, once dry, a big helping of purple glitter spray afterwards. 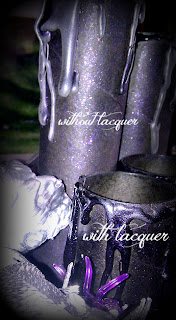 The shorter rolls were treated to clear lacquer as a finishing touch, the larger ones left to look a bit dusty and tattered.

The rolls are stuffed with newspaper, and they will receive a flameless tealight each (sprayed black) when it's time to display the whole thing.

What do you think, did Skelli And Mr Mummy die in vain? 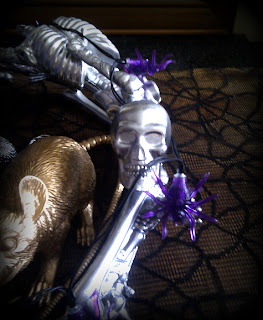 He looks happy enough- in fact he doesn't seem to give a rats' @rse (pun intended)!

So, there you go, I bet you have never seen a Hallowe'en Advent Wreath before. Don't say I don't broaden your minds!

For now, my, erm, candle rolls grace the mantelpiece, awaiting their flameless candles. And I must say that they look better than in the photos- the glitter really shines, and in what is now almost dusk around here, they seem almost real. Yeah, happy with that.
So, shopping list top two items: rechargeable batteries for the spideys and flameless candles. Way more important than washing up- liquid and eggs, don't you agree?

Posted by lisbonlioness at 5:55 PM